Pledge of Allegiance is led by Ron (W4RFA)

Meeting minutes posted by Jack (K4KIN) as submitted by Dee (W4DCH) with one correction pending. 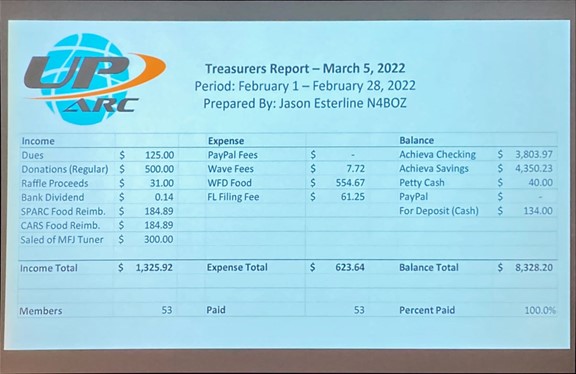 MFJ tuner presented issues so it was sold for the price we paid. New owner is a club member. Alan (W4UB) will be reimbursed for a case for a club radio.

We are always looking for Net Controllers so please volunteer.

Announcements: Club Net is now using the repeater for the rag-chew since some more distant members are unable to participate on simplex. Simplex is still used on the 1st net of each month.

UPARC in the park is being planned for Honeymoon Island on the 12th of March. Sign-up sheet is on the website. Location and plan for erecting antennas is briefly described by Alan (W4UB). Question of call signs is raised and the club callsign could be used as well as your personal call. 2 stations are planned with one using FT8. Additional radios can be accommodated on-site. Shore power will be available. Alan can bring in 8 people in 2 vehicles into the park. Jack suggests that we meet at the shopping center to coordinate park entry.

Breakfast with CARS event occurs on the 26th at “Another Broken Egg”.

Florida State Parks on the air event described by Ray (W8RD) occurs on the 1st weekend in April. This is a POTA event at any state park.

ARRL SSB contest occurs this weekend and based on Jason’s (N4BOZ) experience, plenty of DX is available.

Mike (K4HN) had 8 candidates this morning. 3 didn’t arrive and of the 5 remaining we have 1 Extra, 2 general and 2 novice licenses were awarded.

Raffle is run by Ron (W4RFA)

At approx. 11 am meeting is concluded.