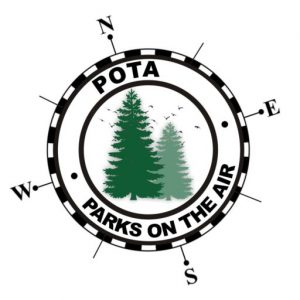 Alan W4UB, Dee W4DCH, Ken WK4KM and I arrived around 9:00 AM and began setup in the small gazebo across from Cafe Honeymoon at the main beach parking area.

We used Alan’s Icom 7600, Ken’s Honda generator and my “Alan’s Baluns” end fed wire on a tripod and push-up pole. The antenna is approximately 60+ feet long—resonates on 20 & 40 meters—and was raised close to 40′ with the tripod & pole. A ground rod, coax and a guy line completed the antenna system.

Setup took about 20 minutes, and we were on the air checking into the SOUTHCARS net in quick order. After spotting on the Parks on the Air (POTA) website, we quickly had a run going using my callsign N4ESU which is registered with POTA. The pile-up quickly grew and our club’s recent contest logging training kicked in to help. I was using an IPad with the HamLog App, clucking away at the keys trying to keep up with the traffic.

Dean N0OAC and George WB9AZV stopped by for a spell to chat and operate. Then we made contact with Richie AA2MF in Redington Beach and Jack N4KIN who was spending the holiday in SC operating portable from his daughter’s backyard.

In total, we made 65 POTA contacts. That covered hams in 24 different states plus Canada, including 5 coveted park-to-park contacts with other POTA activators in a couple of hours. To round that out, Dee made a couple of bonus rag chews!

The weather was glorious, with plenty of sunshine to keep us warm in the cool breeze. A few inquiring minds stopped by and the UPARC club banner was prominently on display.

All in all a great morning of operating. Thanks to all who participated, stopped by or made contact with the crew!

More from OperatingMore posts in Operating »